Tanzania is the largest country in East Africa, located in the southern hemisphere along the Indian Ocean. Tanzania shares borders with Kenya and Uganda to the north, Rwanda and Burundi to the north-west, the Democratic Republic of the Congo to the west, Zambia and Malawi to the south-west and Mozambique to the south.

The highest point of Tanzania is Mount Kilimanjaro reaching 19,341 feet, the highest mountain in Africa, and Tanzania’s longest river is the Rufiji River flowing some 370 miles. Its capital is Dodoma, located in the center of the country. However Dar-Es-Salaam, on the coast, is the economic center and largest city with a population of 2,698,652 inhabitants.

In Tanzania, there are two types of climates, depending on altitude, and proximity to the ocean:

- The coastal has an equatorial climate that is hot and humid, but moderated by winds from the Indian Ocean.  Average lows are in the 60s and highs in the upper 80s.

- The interior of the country, with the highlands that are 5,000 feet above sea level, enjoy a tropical climate moderated by the altitude.  Average lows are in the 50s  with average highs in the 80s. However, when climbing Kilimanjaro or Ngorongoro Crater, the temperature drops drastically, especially at night.

While parts of Central, Southern and Western Tanzania know only one rainy season from December to April, the rest of the country has two rainy seasons. The first, from March to May, is called the "long rains" or "Masika" in Swahili. The second, which occurs in November and early December is called the "short rains" or "Vui", during which rain falls more in the late afternoon or evening.  The hottest months are between December and February, and the coolest are July to September.

The population of Tanzania is made up of over 130 ethnic groups, 95% are of Bantu origin. The rest of the population is represented by mostly Indian Asians (260, 000), Europeans (20 000) and Arabs (70,000). Tanzania also hosts more than 500,000 refugees, mainly from Burundi and the Democratic Republic of Congo following the civil wars.

After the unification of Tanganyika and Zanzibar in 1964 to form what is known today as Tanzania, Julius Nyerere, the first president, decided to promote Swahili as unifying language of the country in order to strengthen the identity Tanzanian against Western culture conveyed by the English.  Thus, while the majority of Tanzanians speak their local language as first language, all speak Swahili as a second language.  English is spoken in major cities but rarely in villages.

Stability and cohesion of Tanzania, after the union of Tanganyika and Zanzibar Archipelago in 1964, are directly related to the action of Julius Nyerere, the President from 1963 to 1985, who remained in power for more than twenty years without installing an authoritarian or dictatorial regime. The archipelago of Zanzibar, however, remains a semi-autonomous state, with its own political, judicial and administrative branches. Executive power is provided by the President of Zanzibar, which is also one of the ministers of Tanzania.

To promote Tanzania as an example of political stability, the United Nations chose to install the Arusha International Criminal Tribunal for Rwanda, judging war criminals during the genocide in Rwanda.  Today, Tanzania is a major mediator in the crisis management of its neighboring countries such as Burundi and Congo (DR).

While only 4% of the territory of Tanzania is devoted to agriculture, this sector is the main source of income in the country, creating 47% of its GDP and employing about 80% of the national workforce. The main crops are coffee, cotton, tea, tobacco and cashew nuts.

With almost 800,000 visitors in 2010, tourism has become the second largest source of foreign exchange (approximately 15% of GDP). Today, more than a third of the territory is declared a protected area through national parks, reserves and conservation zones.

Tanzania soils are rich for exploitation, but lack of infrastructure has kept mining to a minimum. Iron, nickel, gold (third largest producer in Africa after South Africa and Ghana), diamonds and precious stones (including Tanzanite gemstone that is found only in Tanzania), coal, uranium, kaolin, gypsum, phosphates, or gas, oil and cobalt, have all been found in Tanzania.

Although Tanzania has experienced economic growth of 6% to 7% per year since 2000, inflation due to rising energy prices and oil (which represents 28% of Tanzanian imports), does not allow the population to feel the effects of the economic growth.   Tanzania is ranked as the 48th  "least developed country" in the world.

Religion has always been an important part of Tanzanian life.  However, with the recent increase in missionary activity, particularly from the Pentecostal Church, there have been increased signs of religious extremism.   While Zanzibar is about 99% Muslim, the Tanzanian interior is 40% Christian, 35% Muslim, 22% Eastern Religions (Hindu, Sikh, Buddhist, etc.), and 3% follow traditional tribal beliefs. 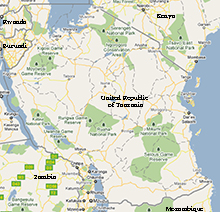