Kilimanjaro's Grand Traverse Route takes trekkers to the three volcanoes that make up Mount Kilimanjaro, using lesser traveled, remote and scenic trails that traverse Kilimanjaro along the Northern Face.  The route provides plenty of time to explore the less known features of Kilimanjaro, including Shark's Tooth and several caves along the route.  The route will also provide amble time to properly acclimatize prior to making the summit attempt.

Day 1 : A Warm Welcome To Tanzania

On arrival at Kilimanjaro International Airport, you will be welcomed to Tanzania by a member of the E-Trip Africa team and then you will be chauffeured to your Moshi hotel.  After dinner you will have a full briefing with you lead guide.

After breakfast and a final kit check, we will drive about two hours to the western side of Mt. Kilimanjaro.  We will stop at the Londorossi Gate to complete the registration formalities before continuing our drive through the dense rainforest.  Keep an eye out for the rare black and white Colobus monkey that is often spotted in this area.  We find the trailhead at the Morum Gate on the Shira Plateau, where we will enjoy lunch before making a short trek across the moorland to Shira One Camp.

Day 3: Shira One to Moir Camp

Today we will trek across the Shira Plateau toward Kibo’s snow covered peak.  Shira was the first of the three volcanoes that make up Mt. Kilimanjaro.  Through reconstructive modeling and lava flow studies, it is believed that Shira once reached 5400 meters high.  Eventually the Shira volcano collapsed leaving a caldera that was later filled with lava flows from Kibo.  Today, we are left with many distinct landmarks including the Shira Ridge, the Shira Cathedral, and the Shira Plateau.  As we approach Kibo, we will leave the busy southern circuit trail and head north to the Moir Camp.

The trail now takes us winding our way through the moorlands as we begin to approach the alpine desert.  The vegetation begins to thin out, as the landscape becomes marked by many strange volcanic plugs.  This area has a large number of lava tubes, which often go unnoticed as the larger formations, such as the lava tower called Shark’s Tooth dominate the landscape.   Depending on the pace of the group we will either make camp at Buffalo Camp or at Pofu Camp.

We continue winding along the trail to the East through a forest of towering winding through a forest of towering Kilimanjaro Giant Groundsel (Dendrosenecio kilimanjari).  The trail continues climbing over vast ridgelines that lead up to the high alpine desert.  We continue past massive volcanic formations scattered amongst the pitches of scree.  We eventually join the Rongai route and gradually descend to Rongai Second Cave Camp where we will spend the night.

Today we set out in a north easterly direction cross the barren alpine desert, where amongst the clumps of grass you will find an array of flowers along the trail. We will take the opportunity to explore some of the rock overhangs, large bolder formations and even a smaller volcanic tower that are along the route.  We will pitch camp at Kikelewa Campsite for a late lunch and then explore the cave during an afternoon hike.

Today we make significant altitude gains as we trek to the base of Mawenzi Tarn, the second volcano that makes up Mt. Kilimanjaro.  Mawenzi is much different than Kibo in that it is a complex mass of several summits that are advanced technical climbs.  The highest summit of Mawenzi is Hans Meyer Peak (5,149m/16,893ft) which is actually the fourth highest summit on the African Continent.   We will spend the afternoon hiking to higher altitudes before return to camp on the shores of a small, yet permanent, lake.

We will leave our attractive campsite and start the trek across the lunar desert of the “Saddle” that sits between Mawenzi and Kibo.  As we approach Kibo you will notice a considerable drop in temperature.   We pass by Kibo Hut and continue to School Hut, also known as the Outward Bound Camp, so as to avoid the large crowds that will make their summit approach from Kibo.  After an early dinner we will retire to our tents to get some rest so that you will be well rested for our exciting summit attempt. 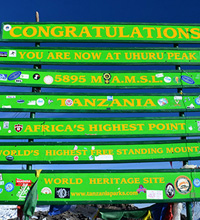 Depending on the weather forecast, we will wake in the early hours of the morning to start our trek before dawn.  After plodding along slowly in the darkness and cold, we merge with the more frequented Kibo Summit Route just above Hans Meyer Cave.  At this point the trail steepens significantly switchbacking to Gillman’s Point (5.680m/18,651ft) on the crater rim.  Uhuru comes into view across the crater.  We now follow the gently sloping path along the rim past Stella Point (5.795m/18,820ft) and onto Uhuru Peak (5.895/19,341ft).   We will spend  some  time  to enjoy  the summit  and to celebrate  your success before we make a short descent

to Crater Camp, located near the impressive ice walls of the Furtwangler Glacier.  In the afternoon we will make a trek to the Ash Pit.

Today, we will have the opportunity to take the ring route around the Reusch Crater where we will hike along the Ash Pit.  This hike will also take us near the Northern and Eastern Icefields.  Or you may choose to return to Uhuru Peak for a second time to enjoy the magical sunrise.  We will then start our steep descent from Stella Point via the Barafu Summit Route.  We will stop for lunch at Barafu Camp, and then continue to the moorlands where we will camp at Mweka High Camp.

After breakfast it is time for a final celebration with the crew that has worked hard to make your journey a memorable one.  We will then make our final hike down through the rainforest to the Mweka gate where your guide will complete a few final formalities and the park will present you with your Summit Certificate.  You will then be driven back to your hotel in Moshi for a hot shower and a comfortable bed.

After a relaxing breakfast a vehicle is available to transfer you to Arusha or Kilimanjaro International Airport, or you may connect with other itineraries. 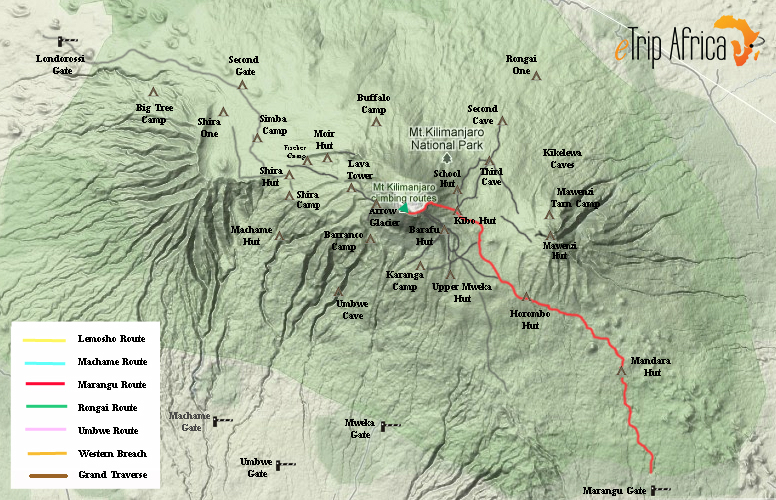 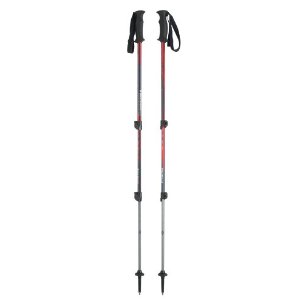 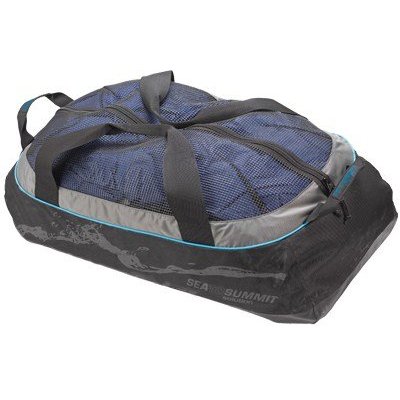 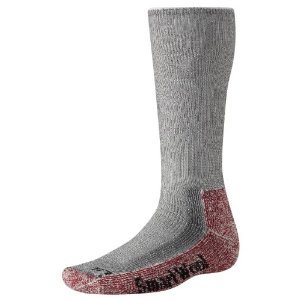 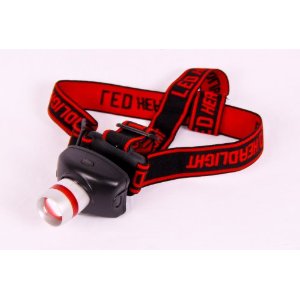 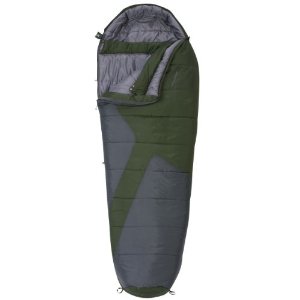