Uganda is in the heart of the African Great Lakes region, located along the Equator. It is bordered by the Democratic Republic of the Congo to the West, Kenya to the East, Tanzania and Rwanda to the South, and South Sudan to the North. Its highest point is Mount Stanley reaching 16,751 ft, making it the third highest mountain in Africa after Mt. Kilimanjaro and Mt Kenya. The South of the country includes a substantial portion of Lake Victoria, which is considered the source of the Nile, the longest river in the world. The Nile starts its long journey in Jinja where it flows to Egypt and empties into the Mediterranean Sea. The capital and largest city, is Kampala, with 1,659,600 inhabitants

Between the eastern branch and the western branch of the Rift Valley, the country is mainly composed of a central plateau with an average altitude of 3,600 feet above sea level, surrounded by mountains.

With the exception of the area of semi-desert in the North-East of the country near South Sudan, which has a semi-arid climate, the majority of the country has an equatorial climate tempered by altitude, with abundant rainfall and moderate temperature (low in the mid 50’s and low 60’s and highs in the low to upper 70s). It can however be very cold when you go up in altitude in the mountains.

Rains can occur throughout the year in the Western Region and around Lake Victoria, while the rest of the country has two rainy seasons. The first, from March to May, is more abundant than the second rainy season from mid-September to December. Thus, the most pleasant seasons to visit Uganda are the dry season from January to March and from June to September, when temperatures are mild and sunny landscape.

The population of Uganda is composed of some 33 tribes, each with its own dialect. South of Lake Kyoga the people are primarily of Bantu origin, and to the North of the lake the people are primarily of Nilotic origin. The official languages are English and Swahili. While English has been the official language since independence in 1962, it is spoken mainly by Ugandans receiving a better education. Swahili is more widely spoken by all ethnic groups and among uneducated peasants, thus it was adopted as the second official language in 2005.

The coming to power of Yoweri Museveni in 1986 ended 15 years of dictatorship and political instability. One of the measures for channeling political tensions, the principal root of the internal tensions, was to establish a system of "democracy without party" or "Movement System". It was not until 2005, following a popular referendum, the multiparty system was authorized. That same year, Parliament abolished the two term limit of the president. Today, President Yoweri Museveni is still in power for his sixth consecutive term.

Thanks to the reforms undertaken by the government, the Ugandan economy has consistently grown at an impressive pace in over the past two decades. Annual growth has averaged 7% per year, well above the average in Africa.

The country has extensive natural resources, including fertile soils, regular rainfall and major mineral deposits of copper and cobalt. The most important sector of the economy is agriculture, which accounts for 60% of GDP and employs 90% of the workforce of the country, principally engaged in subsistence agriculture. The main exports are coffee, tea and tobacco.

Promising sectors are construction (infrastructure rehabilitation in Uganda, but also strong demand for building materials from South Sudan) and communications. The energy situation should improve with the production of the Bujagali power plant, completed in October 2012 and with increased oil production on Lake Albert.

The tourism industry in Uganda hosts over 100,000 visitors each year on average, and contributes to 9. 2% of the GDP of the country. Nearly half of all tourists are residents of Kenya.

Northern and Western Uganda is predominantly Catholic, while Eastern Uganda (near Lake Victoria) is primarily Muslim.  Overall 42% of the population are Catholic, 36% Protestant, 12% Muslim, and 10% practice other Religions. 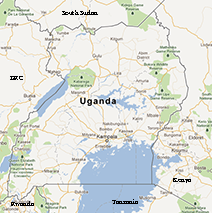